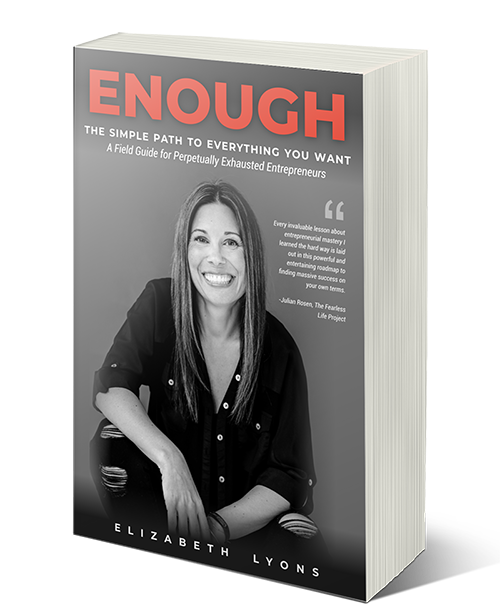 Enough: The Simple Path to Everything You Want details the 20 principles that led a multi-passionate (and historically unfocused) entrepreneur and mom of five—who believed she’d tried just about approach shy of skydiving naked—to finally discover deep, lasting fulfillment. It was written to help others also ready to say goodbye to constant overthinking, overwhelm, and overdoing.

It’s an honest, entertaining guide of how she found success by dropping her ego and being willing to learn from anyone and everyone, from Oscar the Grouch to Betty White.

Both hilarious and thought-provoking, ENOUGH helps readers stop questioning themselves so they can finally (and confidently) commit to identifying and living their life of their dreams.

Elizabeth Lyons is an author, book publisher, and book coach. Until about seven minutes ago, she was also a jewelry designer, project manager, product inventor, on-call plumber, hostage negotiator, and sometimes dog trainer.

Two of her biggest obsessions are backstories and words. She spends her days simply trying to figure it all out—one hour, connection, cupcake and cup of (decaf) coffee at a time—while guiding five kids and at least one dog toward the understanding and fulfillment of their own enough.

Her goal is to remind at least one person each day that he or she already has and is enough, regardless of what external circumstances or voices may say.

You can find out more about Elizabeth and whatever else she’s pivoted to working on in the last 96 hours at ElizabethLyons.com